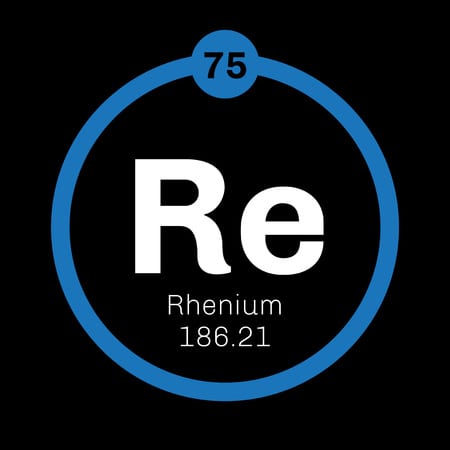 Rhenium is an extremely rare metal with many properties that make it unique. It’s often used in powerful engines and plays a critical role in many chemical reactions. You can find rhenium in both a pure form and as part of many of today’s popular alloys. It can prove to be beneficial to those working in an assortment of industries, including, but not limited to the aerospace industry, the petroleum industry, and more. Here are some more interesting facts about rhenium.

Rhenium was named after a river in Germany.

Rhenium was first discovered way back in 1925 by a trio of scientists named Otto Berg, Walter Noddack, and Ida Tacke Noddack. They named it after the Rhine River, which is located in Germany. They originally discovered it in a handful of minerals and ores.

Of all the elements in the world, rhenium has the highest boiling point. Its resistance to heat makes it an ideal element to use in jet engines and other places in which it’ll be exposed to extreme heat. Rhenium also has the third-highest melting point of all the elements. Tungsten and carbon are the only two elements that have higher melting points than rhenium. Additionally, rhenium has the fourth-highest density of all elements.

Rhenium is rarer than most other elements.

There is only about 40 to 50 tons of rhenium produced every year. The majority of it comes from ores that are found in Chile. It’s believed to be one of the rarest elements situated in the Earth’s crust. The crust contains somewhere between one-half and one part per billion of rhenium.

Could your company benefit from utilizing rhenium? Eagle Alloys can supply you with everything from pure rhenium to tungsten rhenium in bars, sheets, plates, foil, and other forms. Call us at 800-237-9012 today to receive a quote for rhenium.