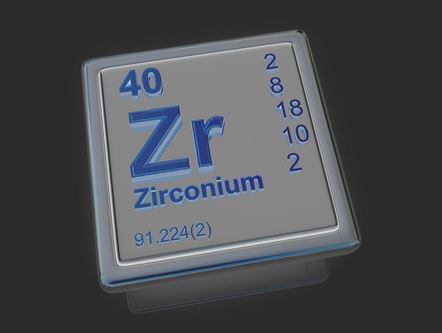 Zirconium is an element that is commonly used as an opacifier and refractory, though it is used in other applications as well. It was first discovered in the late 18th century, but was not isolated until the 19th century or made available in a pure from until the early 20th century.

Zirconium is not found naturally as a metal. Most commercially available zirconium is produced from zircon, which is a silicate mineral.  Zircon is found in a number of areas globally, but the majority of it is mined in South Africa and Australia.

The nuclear industry is responsible for more than 90 percent of zirconium usage each year. Since zirconium does not readily absorb neutrons, it is commonly used in nuclear reactors. Zirconium is also used to manufacture high-quality valves and pumps since it is resistant to corrosion. Similarly, it may be added to steel as an alloy to improve corrosion resistance. It is also used as an opacifier and refractory. Additionally, zirconium may be used in surgical equipment or as a “getter” to remove gases from vacuum tubes.

The symbol for zirconium is Zr. Its atomic number is 40. The name zirconium derives from a Persian term that means “gold-colored.” Despite what the name might imply, zirconium is usually described as being a gray-white color.

Eagle Alloys stocks zirconium in a variety of forms. Alloys include 702 (99.2 percent pure minimum) and 705 (zirconium and 2.5 percent niobium) zirconium. Stock is available as sheet and plate, rod, ribbon slit to size, tubing, and wire in a variety of diameter, thickness, or size.

At Eagle Alloys, we have been providing our customers with essential materials like zirconium for more than 30 years. We specialize in providing high-quality materials at competitive prices. Contact us today at 423-586-8738 to learn more or to request a quote for your material needs.