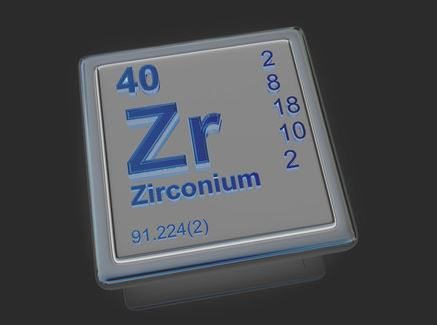 Just reading the word zirconium probably brings to mind “cubic zirconia,” which is the world’s most popular diamond simulant. Zirconium and cubic zirconia are very different things, but the average person is likely to think they’re related because they sound similar, right?

Cubic zirconia is a manmade thing, and you’re likely to find jewelry, such as wedding rings, made from it. Why is it popular? Well, you get the look and feel of a diamond without the high cost!

Getting back to zirconium– Eagle Alloys offers zirconium in every form from stock. Zirconium comes from the mineral zircon and is often used as a refractory, opacifier and/or alloying agent. Zirconium helps produce pumps, valves, heat exchangers and more. Did you know the nuclear power industry uses nearly 90% of the zirconium produced each year? It’s used in nuclear reactors because it does not easily absorb neutrons.

Zirconium, pronounced zer-KO-nee-em, was discovered in 1789 by a German chemist named Martin Heinrich Klaproth and eventually prepared in a pure form in 1914. While zirconium can be found in the Earth’s crust and seawater, it’s generally not found in nature as a native metal. Instead, it comes from zircon, a silicate mineral, mined in various places around the world, most notably Australia and South Africa. Zircon can be utilized in high temperature applications, in moulds for molten metals for example.

Zirconium dioxide, which is known for its strength, is often used in lab crucibles and metallurgical furnaces. Zirconia can be found in some abrasives, such as sandpaper. And, cubic zirconia, as mentioned earlier, typically gets cut into gemstones to be used for jewelry.