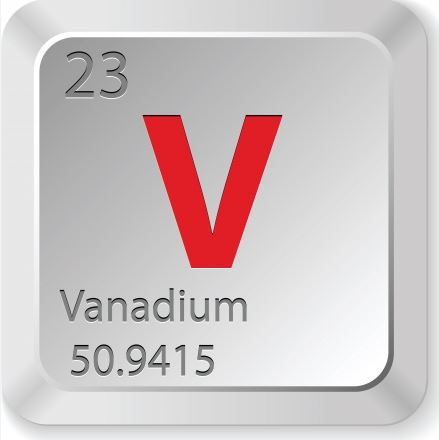 Vanadium may not be a well-known metal, but its characteristics make it an ideal choice for some projects. While vanadium has never enjoyed the popularity of some other metals, it has been around for at least two centuries and has been used commercially for decades. This is an overview of vanadium and its discovery.

Vanadium is a metal that is characterized as being medium-hard and having a distinctive steel-blue color. This metal has several characteristics that make it valuable, including being resistant to corrosion, ductile, and malleable. It is commonly used in conjunction with other metals like steel in an alloy.

The first known discovery of vanadium occurred in 1801 when a Mexico City mineralogy professor, Andres Manuel del Rio, noticed it in a vanadite specimen. This observation was unusual as vanadium is rarely found as a free element. Instead, it is usually found in other minerals like vanadinite or magnetite. Following his discovery of this new element, which he called erythronium, del Rio sent the sample and a letter to the Institute de France. Unfortunately, a shipwreck resulted in the letter being lost before it reached its destination, though the vanadium sample did arrive. The vanadium sample, without the explanatory letter, was then misidentified as a chromium mineral.

Vanadium remained unknown until 1830 when Nils Gabriel Sefstrom, a chemist in Sweden, observed the element while looking at iron samples from a mine. After its second discovery, the element was named vanadium for the goddess Vanadis.

It was not until 1867, however, that the element was isolated. Sir Henry Enfield Roscoe, an English chemist, is credited with isolating vanadium while combining vanadium trichloride and hydrogen gas.

Most vanadium that is used commercially today is produced by heating crushed ore in a process that includes chlorine and carbon. This process produces vanadium trichloride, which in turn must be heated in an argon atmosphere with magnesium to make vanadium.

Eagle Alloys is dedicated to providing quality, metal alloys, including vanadium and vanadium steel. Contact us today at 423-586-8738 to learn more about our alloys or to place your order.